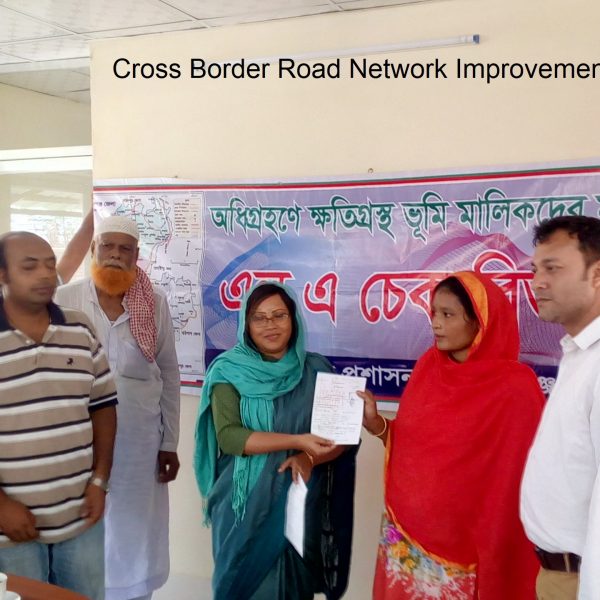 The Government of Bangladesh with financial loan from Japan International Cooperation Agency (JICA) has undertaken the Cross-Border Road Network Improvement Project (CBRNIP) to be implemented through Roads and Highways Department (RHD) under Ministry of Road Transport and Bridges (MORTB). The project coincides with Asian Highways 1 and 41, and also a part of BBIN MVA (Bangladesh-Bhutan-India-Nepal Motor Vehicle Agreement) planned corridor and contributes to build a reliable and efficient cross-border road network among neighboring countries. Moreover, recognizing the opening of the Padma Bridge along AH1 in the future, the current Kalna ferry crossing over Madhumoti River may become bottleneck in future. Therefore, the GOB has included in the CBRNIP construction of a new bridge at Kalna, along with the replacement and reconstruction of selected structure.
Entire work has been divided into Section A (broken down into A1 and A2) that covers Dhaka –Kolkata (India) road in south west region of the country. On the other hand Section B, covers Ramgarh – Baraiyarhat, and Section C covers, Chittagong –Cox’s Bazar roads, are in the southeast region of Bangladesh.
In the Feasibility Study phase, a total of 67 bridges have been included in the preliminary list of candidate structures for initial screening. During the Detailed Design Phase, in Section A1, the new bridge at Kalna over river Madhumoti are to be constructed, described as 4 lane PC-I with Nielsen-Lohse Steel arch, plus SMVT lanes on both sides. In Section A2, 3 bridges (Jhikorgachha, Tularampur, and Hawaikhali) are to be developed to 4-lane PC-I bridges, plus SMVT lanes on both sides. For Garakola Bridge, while retaining the existing lane, 2 new lanes will be constructed, plus SMVT lanes on both sides. Also as part of Section A2, an axle load control station at Benapole will be installed.
In Section B (Baraiyarhat – Ramgarh), at their respective vicinities, 8 old bridges will be replaced by new PC-I girder bridges and 7 box culverts will be replaced by new ones, along with the installation of axle load control station at Ramgarh. For Section C, the 4 selected Bridges (Patiya, Mazar Point, Sangu and Mathamuhuri) will all be reconstructed into 4-lane PC-I bridges, plus SMVT lanes on both sides.